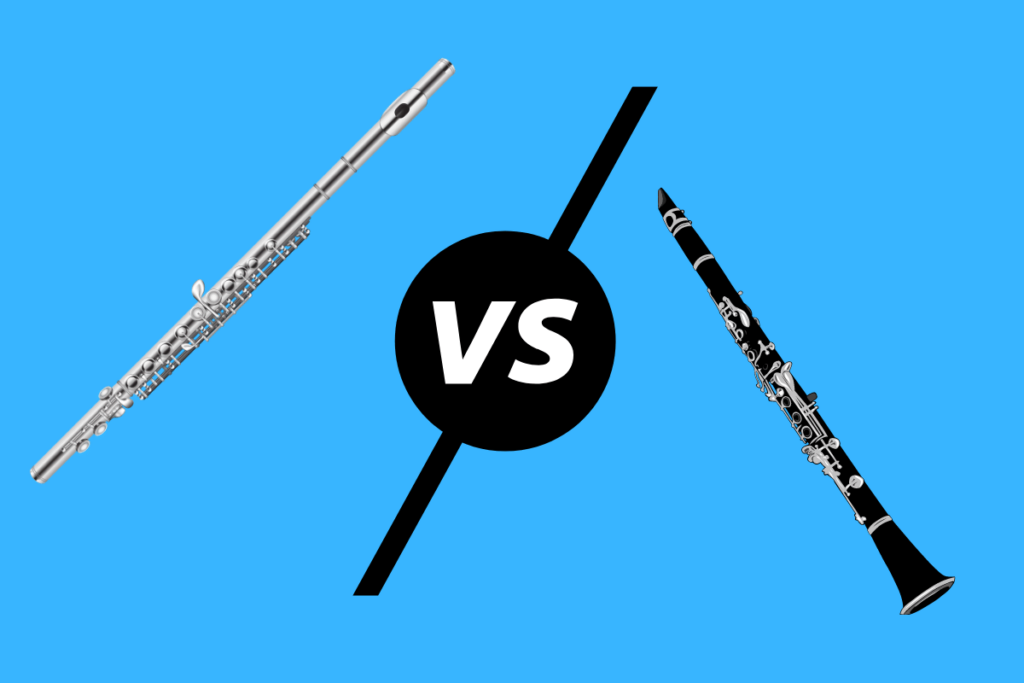 In most cases, but not all, the clarinet is considered easier to learn and this is because it’s hard to make a musical sound with a flute, especially for a learner.

Clarinets and flutes are woodwind musical instruments used in settings like orchestras and bands. The terms clarinets and flutes refer to a broad category of instruments, for instance, under flutes, there’s piccolo, fife or recorder. Also, under clarinets, there are several kinds. Most learners consider the clarinet easier to play since its sound production is direct and simple in comparison to a flute. However, this is subjective since some may find flutes easier to learn. So, if you’re a learner, it is wise to give both instruments a chance, in the beginning, to find out which one is more natural to you. But before that, let’s first get to theoretically learn more about the clarinet and flute and their differences.

What are the differences between a flute and a clarinet?

A flute and a clarinet – How do they compare?

Despite having similarities in their size in terms of length, flutes and clarinets are wildly different. Clarinets have 17 keys and in the Boehm-system clarinets, the keys are up to 24. These keys are responsible for the change in pitch when a clarinet is played. The keys are usually placed close to each other so that the player doesn’t have to move their hand too much when playing and this appearance intimidates and confuses most learners.

A clarinet can also be broken up into sections to facilitate easier transportation and storage. Among the main parts of a clarinet is a bell that is crucial in projecting sound as clarinets aren’t as loud, compared to the rest of the orchestra. In terms of colour, clarinets are oftentimes black or dark brown depending on the paint used and the material.

A flute has at least 16 keys that control the pitch of the instrument during a performance. Additionally, flutes are majorly made of brass and then silver-coated or silver painted. Other metals are also used in making flutes.

In terms of appearance, both instruments are appealing and can be easily stored and transported. However, when considering durability, flutes are more durable as they are metal-made compared to the delicate wood used in some clarinets.

The tone of a flute is consistent and pleasant and its range is higher compared to a clarinet. No wonder most music writings use flutes for the higher ranges. In lower ranges, the flute can reach down to a C4 although the sound produced is airier and weaker as compared to how a clarinet would sound in those ranges.

Sound production of the instrument

The main defining factor for musical instruments is how they make sound and although both clarinets and flutes are woodwind instruments, they produce sound in different ways. To begin with, a clarinet is an end-blown instrument which means that to play, a clarinettist blows air through one end (the mouthpiece), the air goes straight through the instrument (the upper and lower joint and the barrel) and the sound waves produced are projected to the other end (the bell).

The flute, on the other hand, is a transverse-blown instrument. This means that a player has to blow air perpendicularly to the main length of the flute and that is why the flute is played sideways. The sound of the flute is thanks to the oscillation of the air blown escaping and entering the instrument rapidly.

Both instruments work almost the same to produce sound and therefore, they are both equally good.

The sound produced by clarinets is quite distinct and unique. The clarinet’s tone is grounded, direct and earthy with a slight “nasal-singing-like” quality to it. The sound is usually “deep” and “dark” compared to that of the flute.

The flute produces a sweet, light and slightly breathy sound and in higher pitches, the sound becomes less breathy and more intense and may approach a shrill. The overall tone and sound of a flute are described as delicate, beautiful, light and intimate.

Both instruments are equally good as they both produce beautiful sounds.

Flutes are transverse-blown woodwind instruments that produce musical sounds from the oscillation of air across the instrument’s opening. There are several kinds of flutes like piccolo, bansuri, recorders and fife and they usually have 16 keys to control pitch. The sound range of flutes is generally between C4 and C7. Flutes have 3 main parts; head, middle and foot joint and silver and brass are the main materials used to manufacture flutes.

Clarinets are end-blown woodwind instruments that produce musical sounds when the reed vibrates creating a soundwave that is then projected by the instrument’s bell. Clarinets consist of 5 major parts; the mouthpiece, barrel, upper and lower joint and the bell. A clarinet’s range is generally between D3 and Bb6. Cheaper clarinets are usually made of plastic and expensive clarinets are made of wood.

Verdict: So which one is better? A flute or a clarinet.

Both instruments are equally good as they both produce beautiful sounds and can be used in any musical setting. Clarinets and flutes are important members of the woodwind family and they operate almost the same way. The only difference between the two instruments is clarinets have reeds while flutes don’t, they produce sound with different mechanisms and the clarinet is an end-blown instrument while the flute is a side-blown instrument.

How are clarinets and flutes similar?

Both instruments belong to the same family, the woodwind instruments family and they are both 26” long.

Are clarinets a kind of flute?