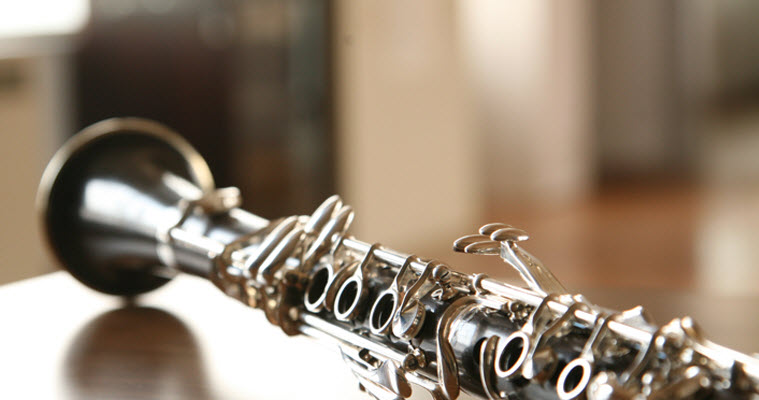 Clarinets are highly versatile, as their use extends in all music genres and settings – including jazz ensembles, marching bands, concert bands, and orchestras. Since their advent in the 17th Century, they started with the B-flat clarinet (also called the Bb clarinet) and later developed into the various clarinet varieties today. In this article, I will look at the popular clarinet types and their applications.

Before looking at the clarinet types, it is helpful to know the ranges you should expect with the instrument. Clarinets are generally classified in one of three ranges, which are:

Among all clarinets, this is the most recognizable and most common type used in different musical types from concert bands to classical music. The reasoning behind its name “Bb clarinet” is due to its status as a transposing instrument – this means that playing a C note on a clarinet sounds similar to a Bb pitch in a concert.

Additionally, it is commonly used because of its surprisingly wide range, which is due to its design as a soprano clarinet. Its range starts at D3 (lower than middle C) on its lower end, while its highest pitch is on Bb6 (second B-flat above the treble clef), making its range about 3½ to 4 octaves.

If you are a beginner, you will likely begin playing the Bb clarinet because of its wide range and well-balanced pitch, as well as its smaller size. It also works well for professional players in multiple playing settings, as it produces a warm and full sound.

This looks almost identical to the Bb clarinet, although it is slightly longer. Its name comes from its sound when you play the note C which sounds like the A note in concert. It is also commonly used, although only by professional players in symphony orchestras instead of beginners to the instrument.

Although this clarinet type is not as prevalent as the A and Bb clarinets, you will still see it in orchestral arrangements. When playing it, it sounds like a concert C, which is where its name comes from. Due to this and its small size, it is also referred to as the “piccolo” or “sopranino” clarinet.

Its range plays slightly below the Bb clarinet – with the highest reaching Eb7 and the lowest starting from G3. Because it is trickier to play it in tune with other instruments, it is more common in clarinet choirs to handle the higher parts of the arrangement that the Bb clarinet may not play comfortably.

Compared to the Eb soprano clarinet, this Eb clarinet type is much larger, has a distinct bend shape, and produces a low pitch. In terms of appearance and pitch, it is similar to the basset horn.

Its range reaches up to Bb5, while it starts at Gb2. Its usage is relatively rare, though most of its appearances are in small chamber ensembles and concert bands. It also works well in clarinet choirs, though it does not have the projection power of a bass clarinet.

This is a popular clarinet option that is played by professionals, and it sounds similar to a concert C when playing a Bb on it. Its popularity soared during the classical era thanks to composers like Wagner, and its sound is rich enough to play in a wide range of musical styles like jazz and concert bands.

Its written range is slightly similar to the Bb clarinet though it is lower by an octave and a second, and it has the same fingerings in addition to some keys for extra range. Therefore, it can play between C2 and A6 in its written range, but it will produce sounds ranging from Bb1 to G5.

It is much larger than some clarinets, and its bell has a similar bend to a saxophone bell. Due to its size and weight, it requires a strap for additional support during playing.

Among the common clarinet types, these are the least common varieties. They look like extreme versions of bass clarinets, with a maximum height of 7.5 feet.

Both produce very deep sounds as they play a minor third lower than the bass clarinet, so they only feature in clarinet choirs and bands.

A look at popular clarinet types and their attributes

This article only focuses on popular clarinet types due to their versatility, with the Bb clarinet being the most popular option of the bunch. There are additional clarinet types not outlined here, but they are rarely used and you will not see them except in clarinet choir arrangements or if virtuosos are playing them.

How many clarinet types are in existence?

So far, there are up to 11 types of clarinets, but only 5 or 6 types are frequently used in multiple situations.

What is the easiest clarinet type to play?

The Bb soprano clarinet is the easiest and most “normal”, as it is very versatile and works well for multiple skill levels.

What is the lightest clarinet?

The Eb clarinet is the lightest among the common clarinet types, and also has the brightest timbre.