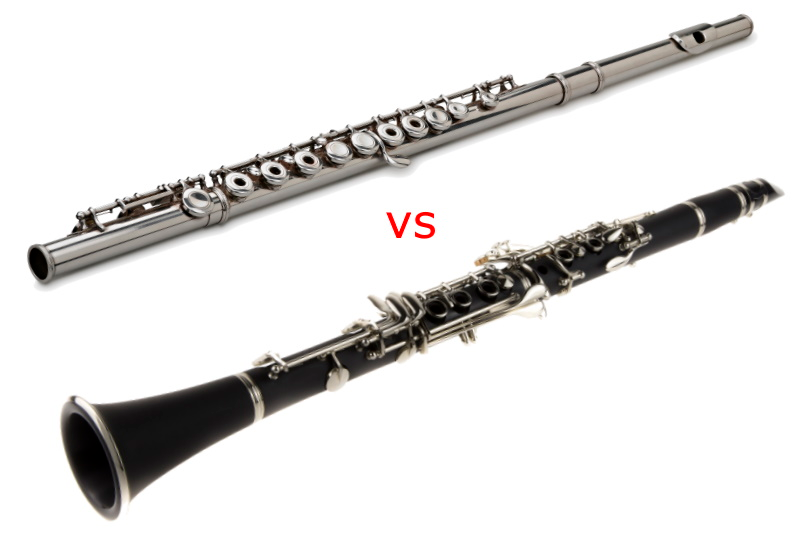 Both clarinets and flutes belong to the woodwind instrument family because originally, they were both made out of wood. Today, the clarinet is still made of wood but the flute is made out of metal, typically silver.

The majority of students who want to play in a band are usually torn between the clarinet and the flute. In musical settings, these are the most popular instruments and they are mainly used for their melody. As stated before, both instruments belong to the woodwind family and also they change pitches the same way and are used for the same roles in ensembles. Despite these similarities, clarinets and flutes have major differences in their design, sound and sound production and cost. Clarinets are single-reed instruments while flutes are reedless instruments. This article has differentiated clarinets and flutes in detail so read on to find out more.

What are the differences between clarinets and flutes?

Clarinets vs flutes – How do they compare?

A clarinet is a single-reed instrument with five major sections; the mouthpiece, barrel, bell and the top and bottom joints and each of these sections are assembled carefully with a twisting motion. The clarinet has corks on the ends of these sections to smoothen the assembling process and cork grease is typically used when the corks dry out. The clarinet is 26 inches long and has a cylindrical bore and open tone holes. The material used to manufacture high-end clarinets is grenadilla wood and the cheaper options are commonly made out of plastic.

A flute is the only woodwind instrument that doesn’t use reeds to produce sound. This instrument consists of 3 major parts; the head, body and foot joint and each of these parts are also assembled carefully by a twisting motion. Unlike the clarinet, the flute doesn’t have any corks or paddings on the ends of the parts so you don’t require lubricants or grease. Also, flutes either have open tone holes or closed tone holes. This instrument is 27 inches long, has 18 keys and is cylindrical and is commonly made of metal, silver being the most popular.

Regarding design, both instruments are equally good as they are almost similar in length, the number of keys and general appearance.

A clarinet lies in the key of Bb and since it is a transposing instrument, clarinet players must comprehend the concept of clarinet transposition. This instrument ranges from E3 to G6. The clarinet produces rich, full and well-rounded sounds and the throat tones are usually the most difficult in this instrument as they oftentimes sound unstable, flat and pale. The clarinet’s altissimo register is generally piercing.

A flute is a concert-pitched instrument meaning that the notes it produces are the same as the notes of a piano and its range is from C4 to D7. Some flutes have a B foot which allows them to naturally reach a low B and the flute’s lower register is typically rich and mellow. However, this low register is hard to project. The flute’s middle range is sweeter, the middle-high is excellent with a good projection and just like the clarinet, the altissimo range is thin and piercing. Generally, the sound that a flute produces resembles that of a human voice since it is delicate and pure.

In terms of sound and range, both the clarinets and flutes are equally good as they produce beautiful, rich and interesting sounds.

Both the flutes and clarinets can be found in band and orchestra settings but more commonly in band settings. In orchestras, 2 to 3 flutes and clarinets are mainly used because the woodwind and brass parts in orchestras typically have a soloist role. For a concert band, the two instruments play together and lastly, clarinets and flutes are sometimes featured in jazz ensembles.

In terms of ensembles, both clarinets and flutes are also equally good as they are oftentimes used in the same musical settings.

Sound production is one of the major differences between clarinets and flutes. Clarinets have mouthpieces where the clarinettist blows into the instrument. However, blowing isn’t what produces sound in a clarinet. Rather, it is the reed attached to the mouthpiece that vibrates as the clarinet player blows causing air in the instrument to vibrate, thus producing soundwaves that are then projected by the bell. A ligature is used to help keep the reed in place. A clarinettist should blow air in a controlled fashion or else the clarinet will squeak.

For flutes to produce sound, the player delicately blows into and across the embouchure hole causing air to rapidly oscillate inside the instrument. The oscillation of air is and out of the flute is what produces the sound we enjoy.

Both instruments require the player to master the perfect embouchure technique thus they are both equally good in this category.

Clarinets are single-reed instruments whose range is from D3 to Bb6. These instruments are 26 inches long, have 17 keys, produce sound when the reed in the mouthpiece vibrates and they are commonly used in orchestras, jazz and bands. They constitute 5 major parts; mouthpiece, top and bottom joints, barrel and bell. Clarinets are made out of either wood or plastic and usually cost around $2500 for intermediate-level instruments.

Flutes are reedless woodwind instruments whose range is from C4 to C7 and constitute three main sections; head joint, body joint and foot joint. These instruments have 18 keys, are 27 inches long, produce sound when air oscillates rapidly in and out of the instrument and they can be used in all musical settings. Flutes used to be made out of wood but today, they are made out of metal, with silver being the most popular, and they usually cost around $2000 for intermediate-level flutes.

Verdict: So, which one is better? Clarinets or Flutes?

Between clarinets and flutes, which one is easier to play?

The general notion is that the clarinet is easier to learn and play and this is because the flute is quite difficult to make sounds with, especially for beginners. Clarinets on the other hand are simple and direct in their sound production. However, remember that this is a general assumption, therefore, it is subjective. Some may find the flute easier to learn and play. The only way to know is to try both instruments and see which one feels natural to you.

How do you maintain clarinets and flutes?

The maintenance requirements for clarinets and flutes are the same. It is crucial for both clarinet players and flute players to learn how to fix minor issues with their instruments. Both clarinets and flutes should always be kept clean and dust-free and should be swabbed after every performance. Also, both instruments should be kept moisture-free to prevent rusting in the metallic flutes and cracking in the wooden clarinets.